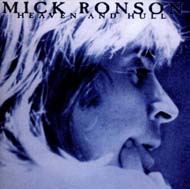 In 1984 – Capitol Records released Roger Taylor’s “Strange Frontier” album with different track listing (USA).
In 1995 – Brian May wrote Queen Fan Club Summer magazine, stating they were within a few weeks of delivering final mix of Queen’s new album and working on it both in London and Surrey.
In 2001 – “All The Young Dudes” from the Freddie Mercury Tribute Concert, ft Queen, Ian Hunter and David Bowie, released by Spitfire Records on Mick Ronson’s posthumous album “Heaven And Hull”. [CD HERE]
In 2003 – Brian May, Roger Taylor and Kerry Ellis in studio with Neil Murray, Mike Dixon & Kerry Ellis recording Kerry’s cover of ‘No One But You’.
In 2011 – Brian May & Kerry Ellis play Goodwood Festival of Speed, West Sussex, UK.

In 2012: Freddie Mercury’s black and white harlequin stage costume sold for £22,500 at Bonhams Entertainment Memorabilia sale (Tuesday 3 July), in London. Bidders competed fiercely for the iconic costume, pushing the final price well above the pre-sale estimate of £8,000 – 12,000.
In 2012 – Queen + Adam Lambert play Moscow Olympic Arena, Moscow, Russia, joined for “Life Is Real (Song For Lennon)” by Russia singer Zemfira. Before the concert Brian May was treated by a Russian knee specialists for a torn cartilage in a knee joint.

In 2015 – Queen and David Bowie “Under Pressure” used as music for the film and trailer of “Minions”.
In 2016 – Brian May began”The Guajara Expedition”, climbing the 2,718 metre high Mount Guajara in Tenerife, staying with his team at the top of the mountain. Brian May spent all night watching the stars and enjoying the sunrise.
READ AND PHOTOS HERE: Destination: Guajara and Sunrise and more
In 2016 – The “Mail On Sunday” published an article, stating Queen Productions looking for a new venue for the musical “We Will Rock You”.